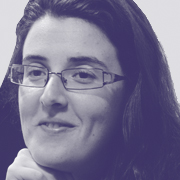 Yazidi Community Struggles to Grapple with Children Born of Rape

The spiritual leadership of the Yazidi community decided to welcome children born to Yazidi women enslaved by ISIS during their captivity, but due to communal push-back, quickly reversed the decision

Three days after issuing a decision implicitly welcoming the children born to Yazidi mothers and their ISIS rapists, the Supreme Spiritual Council of the Yazidi faith reversed its decision. This reversal follows an outpouring of largely negative reactions to the decision among members of the Yazidi community. The children, considered Muslim under Iraqi law because their fathers are Muslim, were born to Yazidi women captured by ISIS during the genocide the extremist organization perpetrated against the small ethno-religious community in northwestern Iraq in 2014. Following their capture, the women were enslaved and raped, and as a result, hundreds Yazidi women gave birth to children in captivity. With the gradual collapse of ISIS as a territorial entity, thousands of women and children were freed from ISIS slavery. The closed Yazidi community largely welcomed the women and children enslaved by ISIS who were born to both Yazidi parents, but struggles to accommodate the children born of rape. The pushback against the decision of the Spiritual Council, the subsequent reversal of the decision and the current legal status of these children in Iraq point to the need for solutions outside of Iraq for these particularly vulnerable children and their mothers.


In 2014, as ISIS captured a third of Iraq’s territory in a few weeks, it swept across the Sinjar Mountain, the ancestral home of the Yazidi community, a small ethno-religious community numbering about 550,000 members at the time. ISIS deems the Yazidis to be infidels and as it rampaged through the region, it massacred about 3,100 of the members of the community, many of them men, and enslaved about 6,800 women and children. In total, about 2.5% of the Yazidi community were murdered or kidnapped during the genocide. The women and young girls were then distributed and sold between ISIS members, who traded the women and girls among themselves as property, using them as sex slaves. Many of the young boys were forced to become child soldiers for ISIS. According to estimates of the Yazidi community, about 3,000 Yazidis captured by ISIS remain missing, even after the collapse of the “Caliphate” as a territorial entity.


Starting in August 2014, some women and children were able to escape their ISIS captors or their families were able to pay the ISIS men holding them for their release. As ISIS shrank territorially, some women and children were liberated by the Iraqi and Kurdish forces. In late 2014 and then again in February 2015, the Baba Sheikh, the religious leader of the Yazidi community, issued a historic decision welcoming the Yazidi women captured by ISIS back into the community, despite their forced Islamization and rape. This decision broke with Yazidi traditions, which excommunicates anyone converting to another religion or engaging in sexual intercouse with anyone outside the group, even if under duress. 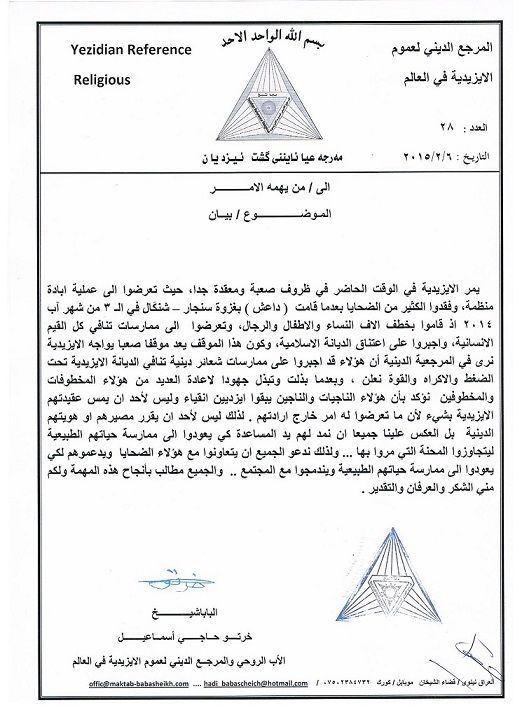 “The female and male rescued [from ISIS] will remain pure Yazidis and no one should question their Yazidi faith, since the things that happened to them were against their will.” The declaration of Baba Sheikh in February 2015

As the duration of captivity at the hand of ISIS protracted, more and more of the women rescued from slavery had children born to fathers who are ISIS members. According to Yazidi traditions, both parents of a child need to be Yazidi for the child to be considered a member of the community and conversion into the religion is impossible. The children born of rape are particularly stigmatized because their fathers are not simply non-Yazidi, but also the perpetrators of genocide against the Yazidi people. This stigma and religious tradition led women rescued with children born of rape to either abandon their children in orphanages, or remain with their children, removed from their family and community. Yazidi activists I interviewed in Syria, both Syrian and Iraqi refugees, believe that multiple Yazidi women are continuing to live in the al-Hawl refugee camp among families of ISIS fighters after being rescued from Baghouz, the last hold of the “Caliphate”, without disclosing their Yazidi identity, due to fear that they’ll be forced to abandon their children in Syria.

Recognizing the need of these women and children, Yazidi civil society organizations and activists, members of the Yazidi diaspora and psychologists began engaging the Yazidi Spiritual Council several months ago to press them to issue a religious ruling concerning the children, according to two activists and one psychologist involved in the effort. The result of those deliberations was the edict by the Supreme Spiritual Council issued on April 24, 2019, implicitly welcoming the children born of rape into the community. The wording the statement was vague, referring to “welcoming of all the rescued [plural form, male], considering what has happened to them to be a matter against their will.” The Facebook page of the Supreme Yazidi Spiritual Council, when posting the decision, specifically referred to “the Yazidi women rescued and their children,” but this language was not included in the statement itself. Activists within the community who pushed for the decision also presented the decision as one welcoming the children born of rape, to the incredulity of some Yazidis commenting online regarding the decision. 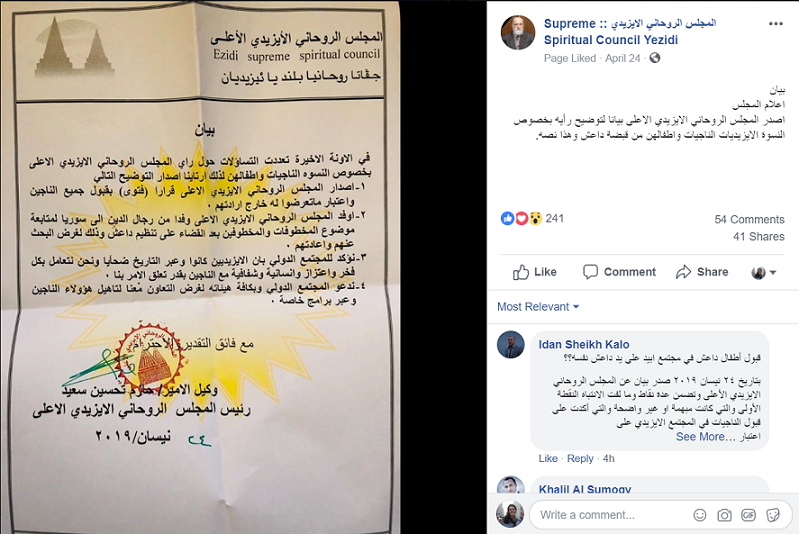 Screenshot of the April 24, 2019, decision, posted on the Facebook page of the Yazidi Spiritual Council

The reactions to the decision among Yazidis varied, with women in particular welcoming the decision. However, the online and offline discourse regarding the decision, dominated by men, was overwhelmingly negative. The Internet, and particularly Facebook, serves as the salon of the Yazidi community, now mostly displaced from their ancestral homeland, spread across Western countries and camps for the displaced, mostly in Iraqi Kurdistan.

Yazidis believe that the genocide perpetrated by ISIS is the 74th farman (the term Yazidis use for genocide against them) the community has survived. Saed, who has returned to Sinjar following the 2014 genocide, wrote on Facebook: “73 farmans did not succeed in erasing our existence, and our father and grandfathers preserved the purity and untaintedness of the Yazidis, and our blood has not been mixed with the blood of anyone other than us for thousands of years!” He went on to add: “the welcoming of our sisters and daughters [enslaved by ISIS] is a holy duty, but welcoming the children of ISIS men is a completely unacceptable step.” Eido, who now lives in Khanasor, Sinjar, commented: “the children of the rescued women from ISIS are 200% ISIS and anyone who considered them to the Yazidis are considered an ISIS themselves.”

Many of the negative comments focused on a the refusal to marry their children with children born to ISIS fathers. Kares, from Khanasor, Sinjar, commented “how can a Yazidi welcome a child descendant from ISIS who fought and slaughtered the same family? This is the beginning of the end of pure Yazidi identity. Maybe after dozens of years, this child with the contaminated blood will [marry] a Yazidi girl[?]” Khudayda, a Yazidi refugee in the United States, explained that the children will not be welcomed in the community “these children will be destroyed within Yazidi community. Whoever among them raises his head, they’ll be called “children of ISIS”, etc. Who among you is ready to wed off his daughter to such a boy??”

This pushback from the community contributed to the decision of the Yazidi Spiritual Council to reverse its decision, according to activists involved in pushing for the original decision. Since the original religious edit was vague, the new decision, issued on April 27, described itself as a “clarification,” stating that the children born of rape were not “at all” the subject of the decision issued three days prior. 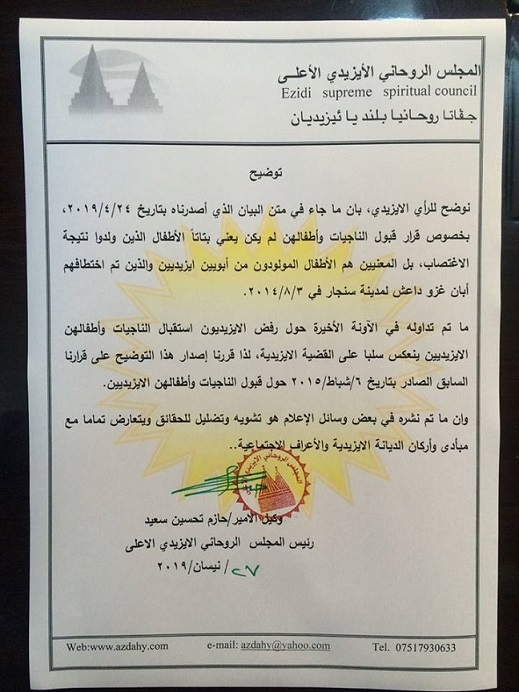 The decision issued by the Supreme Spiritual Council of the Yazidis on April 27, 2019

The positive responses of Yazidis to the decision are one indication to the significant change the community is undergoing, with many, particularly women, being willing to break with the core of Yazidi traditions in the name of universalist principles. At the same time, the overwhelming fierce pushback against the decision points to the need to find solutions outside of Iraq for women who wish to keep their children born of rape. Even if the religious edict had not been reversed, the pushback against it from the community means that these children would suffer stigma and abuse if they remain in Iraq. Western countries have admitted tens of thousands of Yazidi refugees since the genocide and should now prioritize the resettlement of these survivors of ISIS atrocities. In these countries, the locals and the Yazidi communities will be able to offer these stigmatized victims a more welcoming environment after almost five years of unimaginable horrors.

Article / Yaël Ronen
Morocco First: Does American Recognition of Morocco’s Sovereignty Over Western Sahara Foretell the Status of the West Bank? Article / Mikhael Manekin
Is it possible to fight against separation and promote it at the same time? Article / Shaul Arieli
The Day Netanyahu Made a Laughingstock of Trump Article / Shmuel Lederman
Anti-Semitism in Labor? Only if any pro-Palestinian voice is “anti-Semitism”